The staff here at Aston Shaw have raised a grand total of £5,796.68 for Norfolk’s cancer charity, Big C. 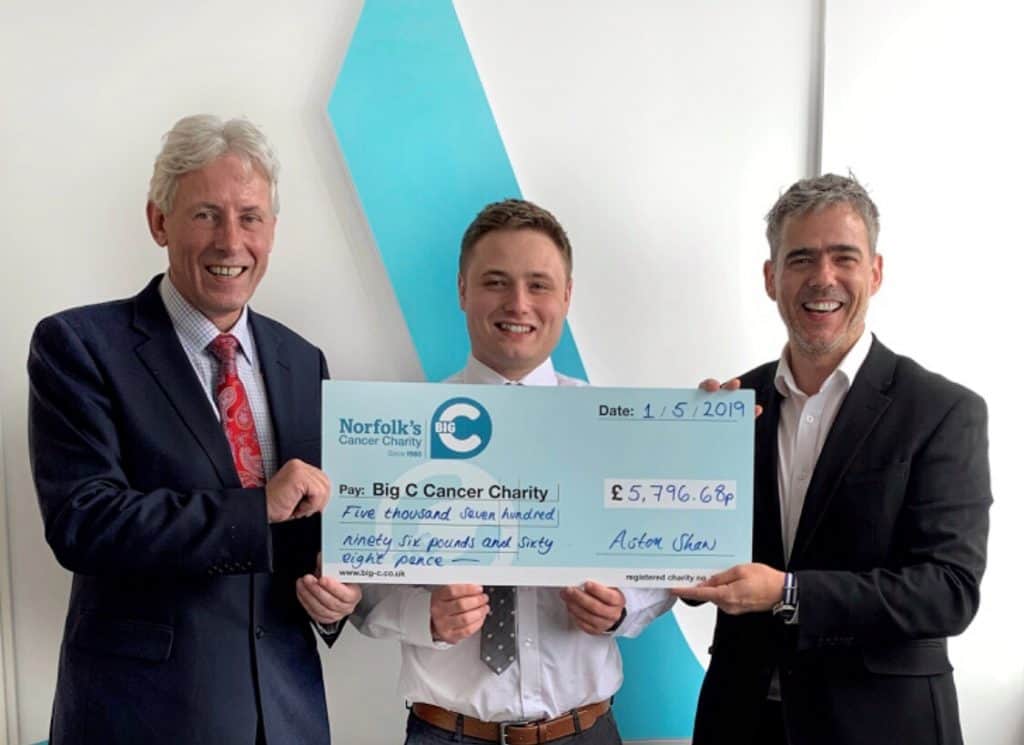 Director, Dominic Shaw was delighted to present Dr Chris Bushby, Chief Executive of Big C with a cheque for £5,796.68 raised through a variety of fundraising events.

Over the course of the year, we have taken part in a range of fundraising activities, including a Colour 5k, Inflatable 5k, Dress Down Days, Networking Events, a Charity Pub Quiz and a Sponsored Silence by Aston Shaw’s ‘most talkative employee’.

Dominic Shaw said: “It’s a real pleasure to be able to donate such a sizeable sum of money to Big C, we’ve had a lot of fun raising it and we know that it’s going to a very worthwhile cause.”

Dr Chris Bushby said: “We rely on voluntary donations for the majority of our income, so support from local businesses is really important. We’d like to say a massive thank you to Aston Shaw for choosing us as their charity for the last year. It’s been a brilliant year working with the whole of the Aston Shaw team.”

Our new charity of the year is East Anglian Air Ambulance, a life-saving charity delivering critical care to seriously ill or injured people in the region. We aim to beat last year’s total and raise at least £7,000.

🧠 It's World Mental Health day - an important opportunity to raise awareness of mental health issues around the globe, and finding ways to look after ourselves.For links, info and help available in crisis, visit ow.ly/E1Y650GouJ0#WorldMentalHealthDay #MentalHealth pic.twitter.com/nozQKuOCYu

We are on the look out for two Experienced Bookkeepers to join our dynamic team in Norwich 📣To find out more or apply, visit astonshaw.co.uk/careers#Careers #Accounting pic.twitter.com/zCa0HoT11x

📘 Are you a recent school, sixth form or college leaver? 🎓 Or a graduate looking to start a career in accountancy? 👍 If the answer is yes - our apprenticeships and traineeships could be for you!Find out more here: ow.ly/IjvU50GlsOf#Apprenticeships #Careers pic.twitter.com/Hd6GhRu9M2

📣 We are looking for a Client Service Representative to join our Norwich team.Find out more & how to apply on our careers page: astonshaw.co.uk/careersWe look forward to hearing from you! ⭐#Hiring #Careers #Finance #Norfolk pic.twitter.com/n2l3Vs33Fd