We’re proud to reveal that we have been shortlisted in two categories at this year’s British Accountancy Awards! 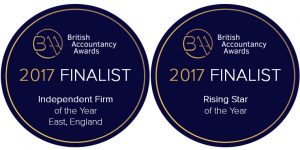 The purpose of these awards is to identify and celebrate excellence within the accountancy industry. With that said, we’re extremely proud to announce that we have been shortlisted in the Independent Firm of the Year category and that one of our own staff members, Luke Jackson, has been nominated for the Rising Star award.

Mark Noakes, Director, commented: “I was delighted to hear that not only had we received a nomination for one category, but two! To make the shortlist, we had to provide evidence that clearly demonstrated our distinction as an accountancy firm. It’s very rewarding to learn that our hard work has been recognised on such a grand scale. I’m extremely pleased for Luke Jackson as I can think of no one more deserving of the Rising Star award than him.”

We look forward to 13th October 2017 when the winners will be announced at the glamorous awards ceremony held at London Hilton on Park Lane.

We are looking for a motivated Payroll Clerk to join our dynamic team in Norwich. If you think this could be you, apply online today! astonshaw.co.uk/wp-content/up… pic.twitter.com/ILGQEx1cbe

A report suggests that output in the East of England should recover faster next year than in other parts of the UK. Read more: edp24.co.uk/business/icaew…

We're on the look out for an experienced Audit Senior to join our dynamic team. Find our more 👉 astonshaw.co.uk/wp-content/up…Know someone who might be interested? Tag them below 👇 pic.twitter.com/otMNwGDMDq